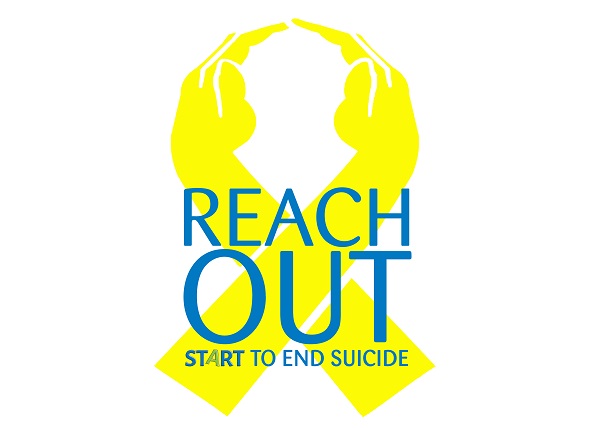 START is celebrating 25 years of working with the people of Salford to recover from mental ill health using creative therapeutic arts in 2018. As part of this commemorative year START is running a campaign entitled ‘Reach Out: Start to End Suicide’, which will promote, through engagement with the people of Salford, reaching out to friends, family members and colleagues that may be at risk of suicide.

‘Reach Out: Start to End Suicide’ is dedicated to the prevention of suicide. Our campaign is based on the foundation and belief that suicide is preventable and everyone has a role to play in preventing suicide. We are aiming for a community that makes discussing feelings the norm and acceptable while being reassured that they matter. Through raising public awareness, educating communities, and equipping people with the confidence to have conversations to support those at risk of suicide, we know we can save lives being lost to suicide, and contribute to the Salford’s ‘Zero Suicides’ ambition.

Evidence tells us that stigmatising attitudes result in people being less likely to get help or give help. If we don’t speak up about persistent stigma, we are at risk of perpetuating a society where we remain reluctant to reach out for help for ourselves or to support others.

Our ‘Reach Out: Start to End Suicide’ campaign will commemorate those we have lost through suicide, save lives in the future, build resilience within our community and end stigma. This campaign will change behaviours and attitudes to suicide prevention, amplify the voices of people with lived experience of suicide and promote individuals to reach out to those in need of support and/or at risk of suicide and for them to be able to reach out for support.

Reach Out: Start to End Suicide will effect meaningful change with its multi faceted community focused suicide prevention intervention. Every facet of the intervention is innovative within its own right, and collectively reaches out to the Salford community in a scale that hasn’t been seen in Salford before.

‘Reach Out: Start to End Suicide’ will be Salford’s first orchestrated suicide prevention programme of activities that include:

– The ‘Vigil of Remembrance’ will be the first of its kind with in Greater Manchester and will harness the community in support of those that have lost loved ones to suicide. This will deliver support and de-stigmatise the grieving of a loved one lost to suicide and enable reflection on the person rather than the act of suicide itself. It will also provide a platform for education on suicide prevention and the roles that everyone can play in ending suicide and instilling hope.

– ‘Turning Salford Yellow for Suicide Prevention’ will educate and empower Salford’s community, on mass, to meaningfully connect with people around them, raise awareness, improve community attitudes and increase public dialogue on suicide, while improving the community’s resilience, saving lives and challenge stigma on a scale never before seen across the region or the country.

– ‘Sea of Hands of Support’ tour of Salford throughout the year having people commit to reach out and be reached out to by pledging through a cut out of a hand that they will personalise and plant within a large installation piece to create the ‘Sea of Hands of Support’ . The purpose of ‘Sea of Hands of Support’ is to highlight to those experiencing mental ill health, at risk of self harm and suicide that the Salford community are here for them and available to reach out to them and be reached out to. We are also involving one to one conversations with community members that will make sure they are talking about suicide and driving change in attitudes and providing support within their communities.

– ‘Remembrance Gardens’, the purpose of the garden is to provide solace and peace to those who have experienced the loss of a loved one to suicide or to those experiencing any type of loss but it is our hope that the community will embrace and enjoy this wonderful space. Another first for Salford through provision of therapeutic horticulture through to the bereaved of loved ones to suicide.

– ‘Builders Lunch’ will be a first this type of innovative approach to public health has been used for this target audience, that will go direct to the workplaces of this hardest to reach at risk group, with suicide being the largest killer of men aged 49 and under, and men aged 15-29 years of age, and especially within the construction and contracting industry.

– Inability to attract and recruit the targeted number of people to the project. A strategic marketing and recruitment plan will be developed and implemented via the steering group. With the groups combined knowledge of the sector and the high numbers of people from our consultation exercises who are interested in this service all contributing to this risk being rated low risk/low likelihood.

– Future funding of the project: this again would be addressed by the steering group through a strategic future funding plan that will be developed and include all available funding avenues including trusts/foundations and sponsorship. Given the positive initial discussions with current commissioners and the fit under the NHS Commissioning Priorities this risk would be rated as medium risk and medium likelihood.