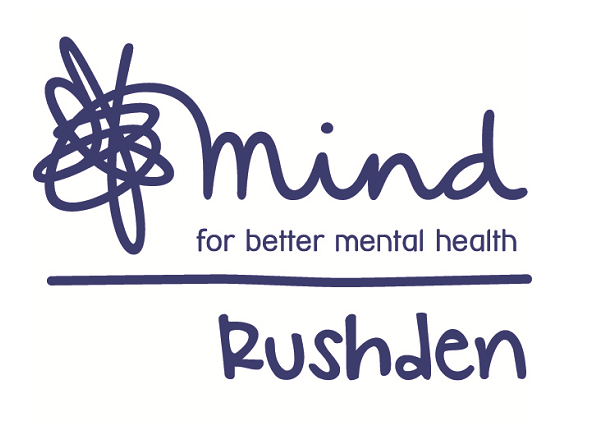 Rushden Mind is an independent charity based in the East of Northamptonshire. As a new branch formed in 2000, Rushden Mind has now firmly established itself as a leading provider of mental health support services in Rushden and the surrounding district.

We are a committed and caring team, from the volunteers on the Board of Trustees, our staff, counsellors, support workers, and all the way through to our valued and wonderful volunteers. A small staff team of 8, we are supported by approximately 38 volunteer counsellors, 4 office volunteers, 11 Crisis Café workers, and a steering group representing our service users.

All of our staff work directly with our clients, service users and visitors across our main three services; Counselling, Well-being Services and our Crisis Café.  Our staff and volunteers are passionate about their work and bring a wide range of experience and skills to the organisation.

As a local charity working with individuals who may be experiencing mental health difficulties, we often encounter individuals who may be feeling suicidal and or have suicidal ideation. In 2019, Rushden Mind’s CEO, Sherry Adams, established a support group aimed at supporting those affected by or bereaved by suicide. Currently there are no other support groups within East Northamptonshire, and since establishing the group, the numbers of people attending has grown each month.
The group is available twice a month, on the first & third Tuesday of every month from 6:30pm – 8:00pm, free and open to anyone affected by suicide.

We also have a new project called SAFE, Suicide Awareness for Everyone, which is a one year pilot project providing awareness talks and training to people aged 15-25.

In addition to providing the support after suicide group, Rushden Mind have received funding from Public Health England to deliver a new pilot project, Self Harm Awareness & Prevention Enterprise (SHAPE) aimed at increasing awareness and understanding around self harming behaviour within schools.

Rushden Mind is also pleased to be working with another Charity, We Mind and Kelly Matters, to help raise awareness about suicide, targeting young people aged 15-25. This project is being delivered under Rushden Mind’s, Northamptonshire Support after Suicide service.

One of the biggest challenges for any relatively small, and self funding charitable organisation is finances to sustain projects, but Rushden Mind have been innovative and creative in our approach and collaborate with a range of organisations in order to be able to deliver a wide range of projects, including the new Northamptonshire Support after Suicide service.